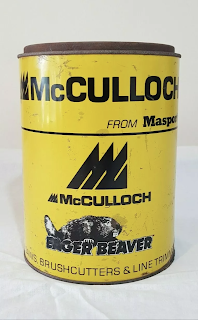 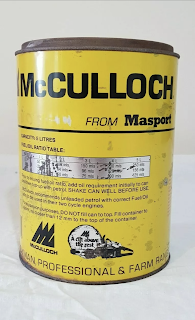 This branch, known as MacCulloch of Plaidis, Rossshire, are the ancestors of the family who founded the McCulloch Motors Corporation in Wisconsin, USA.

The man behind the McCulloch brand was a true American entrepreneur. During his lifetime, he helped mechanize the whole forest industry by the introduction of the first light-weight chainsaw, made a fortune on manufacturing turbochargers for the car industry, and founded four cities.

Robert McCulloch’s most unexpected move, however, might have been buying and moving the old London Bridge, brick by brick, to Lave Havasu in Arizona. Let’s take a closer look at this extraordinary man and the company he created. 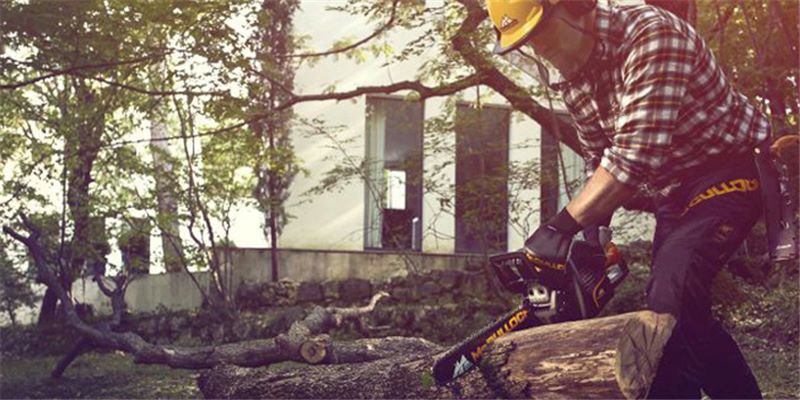 Robert Paxton McCulloch was born on May 11, 1911, in Missouri, as the second child of three. In 1925 Robert and his siblings inherited a fortune from their late grandfather, who, among other things, had worked for Thomas Edison, implementing his power plants all over the world.

After graduation from Stanford University, Robert married Barbra Ann Briggs (whose father was Stephen F. Briggs of Briggs & Stratton) and started his first business, financed by the money he had inherited. The McCulloch Engineering Company produced racing engines and superchargers and soon proved very successful.

After a few years, Robert sold the company and started McCulloch Aviation, building engines for the U.S. air force during World War II. But it was in the years directly after the war that McCulloch’s greatest achievements would see the light of day. 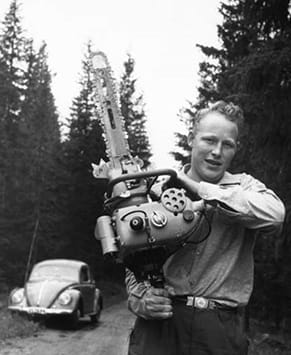 A chain of successes

In 1946, Robert changed the name of his company to McCulloch Motors Corporation. The company then moved from Wisconsin to California, where McCulloch Motors produced its first chainsaw, a two-man model named 5-49.

The real breakthrough came in 1949. That year, McCulloch revolutionized the whole chainsaw industry by introducing a light one-man chainsaw called the 3-25. North American woodworking would never be the same again.

Building on the success of the 3-25, McCulloch Motors continued to grow and expand into new markets. In addition to powerful and world-renowned chainsaws, business by the end of the 1950s included airplane engines as well as kart engines.

Another chainsaw revolution occurred in 1968, when McCulloch introduced Power Mac 6, then the world’s lightest chainsaw. The innovations continued during the 1970s, when a string of electric chainsaws hit the consumer market.

Robert McCulloch tried his hand at many other business areas, including attempts at starting his own line of cars and developing a helicopter for home use.

Most spectacularly, however, he bought the London Bridge and moved it to Lake Havasu City, Arizona, a city he had founded while exploring oil fields in the area.

This purchase did not come out of a sudden impulse, though. The London Bridge of 1833 was gradually sinking into the River Thames and had been for sale by the London Council for quite some time when Robert placed his bid of 2.4 million dollars in 1968.

Completing the project took three years. Each block was marked and numbered, then shipped through the Panama Canal, unloaded in California, and transported to Arizona. The bridge was reassembled by matching the numbered stones.

When the attraction finally opened in 1971, Robert McCulloch had not only given his city a unique landmark, he had also set a new world record for the World’s Largest Antique. Robert McCulloch died on February 25, 1977. But the brand that bears his name proudly lives on, giving garden-owners around the world a boost of power where it’s most needed.

For further reading on McCulloch and the evolution of chainsaws, “Chainsaws: A History” by David Lee (Harbour Publishing) is recommended.

Check out this video of 60 years of McCulloch Corporation in images:

February 28, 2021
I came across this clock key for sale on eBay apparently for a clock manufactured by "Wales & McCulloch". They seemed to be a London-based firm with a shop at 20 Ludgate Hill. I haven't yet managed to track down who this McCulloch was or where he came from so it's still an unsolved mystery! Any further information about Wales & McCulloch would be gratefully received. And yes.. I did buy the key :) EDIT: Added a few other beautiful items made by W & M also below. Pair of antique silver caviar trays in original box by Wales & Mcculloch A yellow metal Egyptian style brooch,  with scarab beetle type insert in fitted case for Wales and McCulloch
2 comments
Read more

February 28, 2021
Here's another "accidental" eBay purchase to share with you. Originally I assumed it was the same firm but now I'm not so sure. This William McCulloch having his firm in Maybole, South Ayrshire, Scotland. I do love it and wonder if there can be many others like it given it was probably used like a business card or advertising flyer. Any information greatly received especially if this is the same McCulloch from "Wales & McCulloch" in London.
1 comment
Read more