A number of items belonging to a Pvt Charles Lawson McCulloch have appeared at auction this week in Glasgow, Scotland. It is always very poignant to me when this happens - the personal belongings of someone appearing in a public auction, not knowing where they came from and equally where they will end up. You always hope that they will go to a good home. 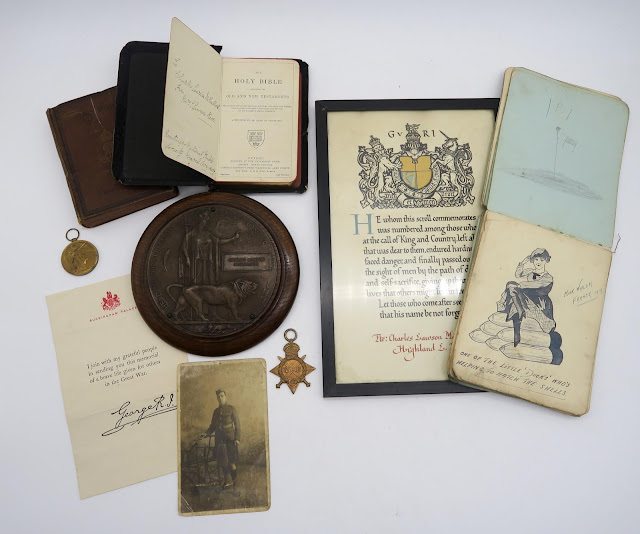 From this we can infer that Charles was born around 1892 in Glasgow. A search in the birth indexes returned a positive result:

A search of the Scottish Death indices for Henry McCulloch in Lanark provided a death in 1913 at age 64 and mother's maiden name of Monteith. This places Henry's birth at about 1849.

A search of the Scottish Birth indices for Henry McCulloch born about 1849 returned no matches.

A search of the Scottish Marriage indices for Henry McCulloch and Margaret returned no matches. Refining to spouse name beginning "M" and limiting to Lanark returned one match.

A search of the 1901 Scottish Census at Ancestry provided additional details including eight children with Charles listed as the youngest child. This also revealed a connected branch now living in Australia.

April 16, 2021
This branch, known as MacCulloch of Plaidis, Rossshire, are the ancestors of the family who founded the McCulloch Motors Corporation in Wisconsin, USA.  The McCulloch Story The man behind the McCulloch brand was a true American entrepreneur. During his lifetime, he helped mechanize the whole forest industry by the introduction of the first light-weight chainsaw, made a fortune on manufacturing turbochargers for the car industry, and founded four cities. Robert McCulloch’s most unexpected move, however, might have been buying and moving the old London Bridge, brick by brick, to Lave Havasu in Arizona. Let’s take a closer look at this extraordinary man and the company he created. Early Enterprises Robert Paxton McCulloch was born on May 11, 1911, in Missouri, as the second child of three. In 1925 Robert and his siblings inherited a fortune from their late grandfather , who, among other things, had worked for Thomas Edison, implementing his power plants all over the world. After graduati
Post a Comment
Read more

February 28, 2021
Here's another "accidental" eBay purchase to share with you. Originally I assumed it was the same firm but now I'm not so sure. This William McCulloch having his firm in Maybole, South Ayrshire, Scotland. I do love it and wonder if there can be many others like it given it was probably used like a business card or advertising flyer. Any information greatly received especially if this is the same McCulloch from "Wales & McCulloch" in London.
1 comment
Read more

February 28, 2021
I came across this clock key for sale on eBay apparently for a clock manufactured by "Wales & McCulloch". They seemed to be a London-based firm with a shop at 20 Ludgate Hill. I haven't yet managed to track down who this McCulloch was or where he came from so it's still an unsolved mystery! Any further information about Wales & McCulloch would be gratefully received. And yes.. I did buy the key :) EDIT: Added a few other beautiful items made by W & M also below. Pair of antique silver caviar trays in original box by Wales & Mcculloch A yellow metal Egyptian style brooch,  with scarab beetle type insert in fitted case for Wales and McCulloch
2 comments
Read more